A Concise Chinese-English Dictionary for Lovers by Xiaolu Guo 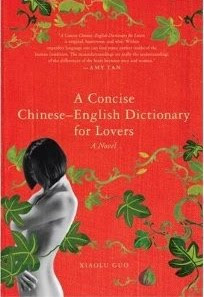 I have read this one....its a late bloomer isn't it? If one persists through the first part of the book (which isn't quite engaging); then suddenly the book starts becoming interesting & engaging in the 2nd half. By the time I finished the book, I quite liked it

Dear Radha,
Shocking good to see you here!!! How you been? Its been ages since we caught up with each other's blogs. Thanks so much for dropping by :) I just took a quick look at yours, photos look stunning. Brings back good ol' memories of our trip. Glad you liked it, it certainly was an engaging read!

You've opened up a new author's writing to me Chitra. I like her premise with the title saying it all. I can see an eastern empathy in some of the experiences of 'Z', all immigrants to the west would understand that. I am intrigued at the final paragraph of your review where your empathy wears thin faced with her amoral life. A very thorough and excellent review and I wish I had the time to read the book but you know my time restrictions due to the course starting soon. I am indebted to book bloggers like you who give me a taste of world literature. Thanks.

Leela! Jolly good to see you here :) Thank you so much for stopping by. With all your other reading commitments, this book may not get to your top of the list, I agree. Its always interesting to read about other cultures and the main reason I picked it up was because it was shortlisted for Orange. Not very disappointing, but could have been better! Keep coming back, your words are encouraging, it will keep my blog going.

Excellent review. I adore discovering good diaspora fiction reads, especially ones that tackle issues of isolation, alienation, loneliness and marginalization - and, from your review, it appears that these are issues faced by Zhuang herself.

I also run a book review blog (over at www.novelniche.wordpress.com ), and I'd be flattered if you're inclined to ever stop by! If you like, perhaps we can trade links. :)

Thanks Shivanee for your nice comments. You have an impressive book blog! I would love to drop from time to time :)

This sounds like a fascinating novel. I must really look into picking it up when I get the chance. =)

Here's what I have observed: many Asian migrants tend think of themselves as being really liberal and Western. But it's only when they hit Western shores that they realise how truly Asian they are.

Well said John :) When I first migrated to the States, it took me a good couple of years to shed the alienated feeling (which still crops up sometimes) to become a bit comfortable with the Western culture. I applaud the author in her efforts in bringing those alienated feelings to light. I was glad her book resonated with me making it a worthwhile read! I hope you like it too.

Your excellent review has got me so excited about this book Chitts! I have had it for a long time now, just haven't been motivated enough to get to it, but now I do! I'm sure, after reading this, one comes away with a new found appreciation for people, but especially writers, writing in a language that is not their mother tongue, wouldn't you say?

Lotus, I'm thrilled to see you here! Thanks much for stopping by. Glad you are motivated to read this book, its a quick and easy read, something you can finish before you know it. From what I have learned from my travel experiences to China and Japan, I have realized that these people struggle to communicate in English as much as we struggle to grasp theirs. Having spoken English all my life, I never gave a second thought to the fact that English presents its own challenges too. Like you mentioned, I'm always fascinated by writers like Yiyun Li, Tash Aw and Ha Jin whose stories keep us spellbound as much as Western authors.

Chitra, this is Awesome. You have created a very good visual of the book in my mind. Great Review Chitra!!!