Nine Lives: In Search of the Sacred in Modern India by William Dalrymple 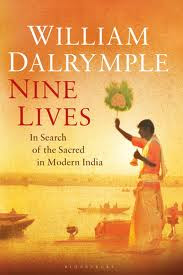 How I have missed your reviews! You have such a lovely way of writing down your thoughts. Love the clarity and the lucidness of your writing, truly, you make reading reviews so pleasurable, thank you!

Coming to the book though...isn't this one an absolute gem? I lived in India for the first 24 years of my life and (in a predominantly Jain community) but everything Dalrymple tells us about Jainism are revelations to me, I certainly didn't know any of this!

Also loved the chapter of the lady Tantrik, I swear I didn't realize these communities existed in modern India...what a revelation. Like you, I would recommend this book to anyone interested in learning more about those religions or communities that function on the fringes of Indian society. Great stuff, cannot wait for Dalrymple's next book.

Dear Lotus - Thank you so much for reading my posts, they sorely missed your comments!! Dalrymple is an absolutely wonderful writer. I'm ashamed to admit that I started reading his books only recently. I am quite determined to devour every single one of his books :) I agree with you, lots of information in this book is a total revelation to me as well.

I had a Jain friend who was close to me through my childhood. I thought I knew everything I had to know about Jainism, only to be proved otherwise by the author.

Because there were many astonishing facts to grasp and contemplate about, the idea of dividing them into several short stories make it more enjoyable, in my opinion.