After You'd Gone by Maggie O'Farrell 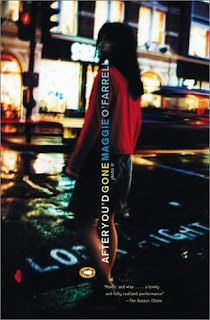 Title: After You'd Gone
Author: Maggie O'Farrell
Pages: 372
Edition: Paperback
Publisher: Penguin Book Literature
From the blurb:
"When Alice Raike's sisters come to pick her up at the train station, they find her wild-eyed, confused, and insistent on returning to London that very minute. Only a few hours later, they receive terrible news - Alice is lying in a coma after an accident that may or may not have been a suicide attempt. While her life hangs in the balance, Alice's family gathers at her bedside. As they wait, argue, and remember, long-buried tensions rise to the surface. Alice, meanwhile, sliding between different levels of consciousness, recalls her past and the end of a tragic love affair..."

I have to admit that my first attempt at reading this novel was an utter failure. Most often I begin reading my books a little distracted and entirely rely upon the author to pull me into the realm through the plot, style of narration or both. Hence, when the book failed to grasp my interest the first time, I put it down after reading a few pages, perplexed and a little disappointed. Then I wondered if it was my apprehension towards reading new authors combined with worldly distractions that needed to be blamed upon. I decided to give it another try. With a feverish concentration and a wrinkled forehead, I devoted a good amount of time reading the first few chapters of the book and this time around my efforts certainly paid off.

The book follows no chronological pattern, often narrated by various characters over different periods of time. The subjects of her novel often shift back and forth between past and present which might confuse or frustrate the readers at the beginning. However, once the initial premise is well built, the book races through the plot for a nail-biting finish. The story mainly focuses on three women Elspeth, Ann and Alice spanning over 3 generations. Elspeth, mother-in-law of Ann, nurtures Alice more than anyone else. Despite knowing some dirty family secrets, she strives to keeps the family bonds intact. Ann, who never properly loved her husband, remains loyal to someone else. Her adulterous behavior brings out negative emotions and her guilt leads to unpleasant encounters with Alice, which are often hysterical and painful. Alice who was never loved by her mother, comes across as a disturbed child and grows up to be cold and distant with her parents. The choices she makes in her life though poor at the beginning, flattens out eventually when she falls for the man who is a real sweetheart. But her self-doubts and insecurities try to rip apart the beautiful life she created. When she finally gets a grip on, she lost it altogether to fate. Though I didn't like Alice initially, the more I understood where she came from, the more I began to empathize with her.

The author touches upon several sensitive issues like religious clashes and infidelity but her triumph comes from those beautiful prose expressing several emotions ranging from love, loss, grief and self-neglect. She is adept at dealing with complexities of family relationships and it clearly comes through her writing. Especially, the passages describing the agony of grief-stricken Alice, the time when she bawls over the phone narrating her insecurities to her sister, unable to get on with her life, her losses - everything moved me to tears. It almost felt as if I was going through all the grief Alice was experiencing. I had to put down the book and cry for several minutes before moving on. What I really liked about the book was the fact that her characters seemed so real, their emotions not fabricated. Though the story constantly churned out several twists, most of it was predictable and it was not a surprising end altogether. In that way, I found it a little comforting that no more heart-breaks need to be endured. Highly recommended!

Posted by Happy Reader at 8:31 AM No comments:

Hope and other dangerous pursuits by Laila Lalami 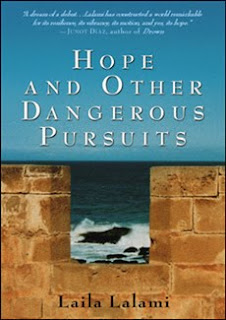 Title: Hope and other dangerous pursuits
Author: Laila Lalami
Edition: Hardcover
Pages: 196
Publisher: Algonquin Books of Chapel Hill
"Tarifa. The mainland point of the Moorish invasion in 711. Tariq Ibn Ziyad had led a powerful Moor army across the Straits and, upon landing in Gibraltar, ordered all the boats to burned. He'd told his soldiers that they could march forth and defeat the enemy or turn back and die a coward's death. The men had followed their general, toppled the Visigoths, and established an empired that ruled over Spain for more than seven hundred years. Little did they know that we'd be back. Only instead of a fleet, here we are in an inflatable boat - not just Moors, but a motley mix of people from the ex-colonies, without guns, or armor, without a charismatic leader..."
Four Moroccans decide to illegally cross the border over to Spain across the Straits of Gibraltar in an inflatable rubber boat with many others. As they set off in their tiny vessel, the "Fourteen Kilometers" they are about to sail, under the cover of the night, might make a difference of night and day in their lives. Alternating between past and present, the novel offers an unflinching account of stories of each passenger who undertakes this journey in hopes of a better future.
Murad - an unemployed university graduate makes his living hustling the streets and serving as a local guide at the 'Tangiers'. A decent job is the only thing that would ascertain his status in the household, after his father's death. Aziz - also unemployed and newly wed works as mechanic, but barely could make ends meet. His illegal emigration is imperative to realize his goal of starting his own business. Halima - a young mother of 3 children, flees her abusive husband and her determination to survive the ordeal makes her more desperate for a new beginning. Faten - an activist of Islamic Student Organization and a university student who repeatedly flunks her exams is now at crossroads after expulsion from school.
The initial part focuses about the dangerous journey itself and the possible outcomes of undertaking one including deportation, arrest and even death. The hunched passengers on the boat gripped with fear, the ruthless sea, broken promises and uncertainties makes a stellar opening for the book. Many of the voyagers are perfectly aware of the imminent dangers, yet their yearning for a better life is so strong they take this journey day after day no matter what. Some make it, some get deported, some just disappeared in the seas altogether. Though it reads fictitious, this still happens everyday at the borders and will resonate deeply with many Moroccan readers. Not much different from what we face at the Mexican-American borders today, isn't it?
The second half of the novel concentrates on the lives of her four pivotal characters before the trip and what brings them together, whether they are successful with the choices they made. Her characters appear so real, you could feel their pain and yearnings. In that process, she touches upon a lot of sensitive issues like the Islamic women's rights, illegal emigration from Africa to Europe, human rights which people in some parts of the world are still battling with today.
Even today, in Asian countries, a foreign education and job opportunities in the West are highly acclaimed and not to be debated about. That might change in the next decade or so, when more economic growth opportunities start moving towards the East and emigrating to the West might lose its appeal among the Eastern population. Yet, as of today, touting the West and all its glory is still prevalent in many cultures and population. The promise of a new beginning itself is worth the risk for many of them. Do they all succeed? Even if they do, what do they lose at the end? And, What becomes of those who utterly fail to make a living, who have nothing but shattered dreams to live with. Would you risk your life or would you rather die in your home land stricken with poverty and hunger. Some of these questions are addressed in these stories and thats what makes it really rich and powerful - the fact that it touches upon several commonalities and current issues. Rich or poor, white or black, regardless of the nationality, we all humans have needs, hopes and dreams - a promise for a better life, a better future. We may or may not succeed. However, life doesn't necessarily follow a rosy path and whatever painful outcomes thrown our way must be endured. This is one such commendable work of fiction that brings you face to face with such harsh realities while making you ponder about human rights, Islamic culture and the East-West relations. Laila is definitely an author to look out for.
Posted by Happy Reader at 6:32 PM 2 comments: