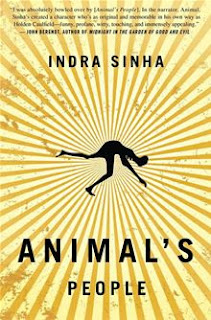 Title: Animal's People
Author: Indra Sinha
Edition: Paperback
Pages: 374
Publisher: Simon & Schuster
Acclaim: Commonwealth Writers Award winner, 2007 Man Booker Prize Nominee
Dec 02, 1984, Bhopal. It was an unforgettable night permanently etched in our sorrowful memories, scarring many people's lives forever. The Bhopal holocaust which killed thousands and thousands of people, burning many of them alive, is a shameful past we all struggle to forget. Every year, this time around, the TV media, newspaper articles and Internet bring back those horrific events alive again and again.
The Gas Tragedy: Built in the 1970s, the Union Carbide factory jutted through the already polluted skies of Bhopal claiming to make pesticides in an effort to aid the country's green revolution. When the expected green revolution didn't go as planned due to monsoon failures, the authorities decided to shut down the plant. However, no buyers came and the company went on a cost-cutting spree. Workforce halved, safety standards diminished. Minor accidents occurred, a few killings here and there due to gas spill. Despite safety audits, warnings and repeated articles in the newspaper condemning the government's neglect in imposing safety rules, no actions were taken. Safety sirens were permanently switched off so as to not disturb(!) the surrounding neighborhoods. One of the most lethal substances, MIC (methyl-iso cyanate) used during the first world war gas, was kept in huge tanks inside the factory. [Methyl iso cyanate is such a deadly, toxic gas, so volatile that unless kept under freezing temperatures, it can explode and cause catastrophic reactions]. 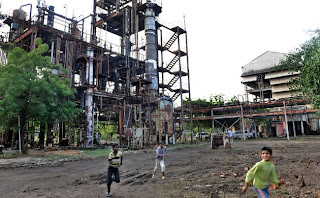 On that fateful night, from inside the Union Carbide factory, what began as a thin plume of white vapor soon morphed into a dense venomous fog, cloaking the night in its devious veil. Nudged by the wind, the fog crept down the alleys, walkways wrapping the shoddy neighborhood, throttling its throat with its monstrous grip. People woke up in the middle of that night, with burning eyes and throat, with flaming lungs. They ran into the streets, coughing and choking, eyes searing with pain, tripping over hundreds of dead people including children. Desperate for their lives, they ran and ran, among many others, including cows and dogs trampling them, ignoring those who just dropped dead. Many struggled to breathe, the gas ripping their lungs apart, gasping for clean air. Over 8000 people died that night and till date the death toll rises over 20,000. More than half a million people remain injured.
The aftermath was catastrophic. People suffered (and are still suffering) eye defects, lung cancer, chaotic menstrual cycles, neurological damages, crippling birth disorders, high cancer rates, diabetes, mental illnesses and much more. Future generations are affected as well. Even as we speak, children of Bhopal are still born with mental illness and physical disorders. The city's polluted waters remains poisonous as the monsoon rains plants poisons deep into the soil which seep into wells and ponds. More than 100,000 people remain chronically ill while they await for any compensation from the government and Dow Chemicals (which later acquired the Union-Carbide factory in 2001). The meagre compensation that was promised perhaps could cover a cup of tea for the rest of their lives. The factory remains uncleaned since neither the government nor DOW Chemicals is reluctant to take up the responsibility. As the nation's biggest scandalous event ever witnessed in the history, the Bhopal holocaust remains a threat to humanity. The apocalypse that gripped the city that night, the terrors they witnessed, the horrific aftermath all comes alive in this heart-breaking novel written by Indra Sinha. 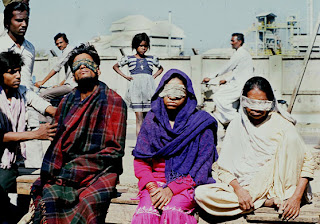 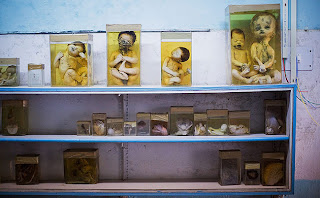 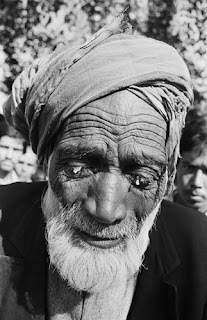 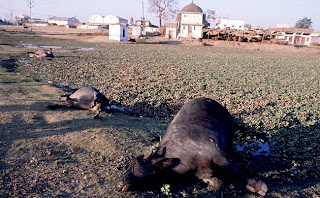 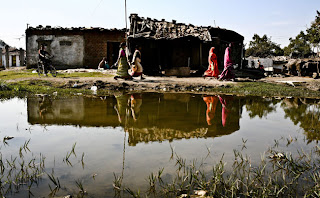 Indra Sinha, a France-based author, himself went on a hunger strike in 2008 supporting the survivors of the tragedy and the local activists condemning the authorities and accusing the government for letting the DOW chemicals off the hook. He has spent about 5 years writing this novel, many of the accounts drawn directly from the experience of his friends. In many ways, he truly triumphs in bringing back those terrors alive, giving readers an unflinching account of the truth, plunging the readers into a world hardly known. Though considered a fiction, the fabrications remain confined to perhaps the character names as their stories turn out searingly painful and honest as the tragedy itself.

The protagonist of the novel, Animal (a.k.a "Jaanvar" in Hindi), narrates this story as voice recordings using a worn-out 'tape mashin' which he hides in a spider hole, in the dilapidated tower he resides in. "I used to be human once. So I'm told. I don't remember it myself, but people who knew me when I was small say I walked on two feet just like a human being". so begins 'Animal'. Being a victim of the gas attack himself, Animal was barely a few days old 'That Night'. He lost his parents that terrible night and picked up by Ma Franci, a French nun, was normal until he was six. One day, a searingly painful attack on his back twisted his spine and didn't leave its monstrous grip until he hunched forward on all fours leaving him permanently crippled. About two feet from the ground, Animal is hunched, his hands deep rooted to the ground, his legs weak, yet his upper body strong as a body-builder. He could navigate through the crowded alleys in a lightning speed, climb up trees, eavesdrop (a.k.a 'jamisponding' as in spying 'James Bond') behind doors and survives in a human world with his pittance of earnings. He loves Nisha, a daughter of a local musician 'Somraj' and yearns to marry her. Zafar, a local hero, who fights against the injustice by protests, demonstrations, hunger strikes and rallies people against the government and the DOW (a.k.a 'Kampani' as in 'Company') asking them to pay compensation, set up clinics to treat the ill and clean up the factory and the polluted water wells and ponds. Nisha falls in love with Zafar much to Animal's contempt. His attempts to thwart their love, though futile in the beginning, takes a disastrous turn of events. Elli, the 'Amrikan' (American) doctress sets up a clinic to treat the diseased, but the locals refuse her offer suspecting her true motives. The plot revolves around the campaign run by Zafar, the many boycotts, hunger strikes, the war in general waged against the government and the 'Kampani'. But, in many aspects, it is also the story that portrays love, regrets, loyalties, sorrow, revenge and lust.

Animal is undoubtedly the most beloved character of all. With his crippled body and an orphaned, desolate upbringing, he earns a magnanimous amount of sympathy in the beginning, no doubt. As the novel progresses, the readers will witness his true motives, his yearnings and the lengths he would 'gallop' to, in order to attain them. He is flawed, of course, does despicable things, but his honest reasonings could make you rather hesitant before judging him. He repeatedly narrates that he is an animal, a one of a kind at that. Yet, I could not find someone more human than him in that novel. His shortcomings - a sex maniac, selfish, greedy 'bugger' - though loathful at times, he comes across as a profoundly honest, human being.

Some Western readers might find the pidgin-like style, Hindi-French-Inglis mixed notes, and the profane language a little difficult to get into (though if you had enjoyed novels like 'The White Tiger' by Aravind Adiga, you may not), his scathing observations will suck the readers right in. I adapted to the style rather quickly, enjoyed reading it a lot. All the characters in the novel are totally lovable - Be it the selfless, bold, Gandhi-ist type Zafar who is willing to lose his life for the betterment of his people, or Elli, the doctress who leaves behind her country to fight for the poor and the deceased, the Comical Somraj who lost his voice 'That night' now finding music in the oddest creatures like in the croaking of frogs, fart of an ant (as Animal observes), Nisha, the lovable teenager who treats Animal like a respectable human, even Farouq, the local thug who does the utmost sacrifice for his people, and Ma Franci, the mother Teresa type French nun, who lost her mind after the accident.

Despite Animal's belief that his audience might fail to comprehend their sufferings, his harrowing account of 'That night' and the unspeakable misery that ensued will surely bring the readers down to their knees begging for an end to misery. As I read, tears flowed incessantly, my numbed fingers gripping the pages, sorrowful eyes going over the lines over and over refusing to turn the page. Sinha's triumph not just lies in his ventriloquistic style, but more on his honest depiction of the corrupted political system and blighted lives of the victims. The authorities indifference to the poor and their denial for justice brings forth many questions in the minds of the readers. Aren't all human lives the same? Why does the law stay partial and delay justice to the poor? Why do the politicians succumb to the demands of a foreign company when their own people are dying before their very eyes every day? Is greed so powerful that it can turn a blind eye to humanity, love and grief? Why do the rich treat poor like scums? Aren't we all equal in the eyes of god? Is god truly there? If he is, Why would he let such atrocious things happen? I am burning with curiosity to seek out the answers myself. Yet I remain perplexed for the answers seemed to elude me. The context of the novel is powerful, the characters complex yet endearing. This compelling novel truly deserves the nomination and awards, perhaps even more recognition would have been better. As for me, It will remain one of the best reads of all time. If you like this novel, you might also want to consider reading 'A Breath of Fresh Air' by Amulya Malladi and 'A Fine Balance' by Rohinton Mistry (both I tremendously enjoyed).