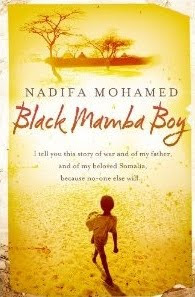 Now you depart, and though your way may lead

Where breath comes hard, and no fresh breeze can reach -

Yet may God place a shield of coolest air

Between your body and the assailant sun.

'Black Mamba Boy' depicted a grim tale of war-torn North Africa during the period of Second World War, when it was ripped apart under Italian fascists and the British invaders. The hero of the story was a 10 year-old Jama who embarks on a treacherous journey through Northern Africa with the sole purpose of reuniting with his father. Set in the 1930s, the story covered the deserted lands of Northern Africa including Somali land, ploughing through Djibouti, war-torn Eritrea, Abyssinia, Sudan and Egypt - some of these countries were seldom focused in modern literature. The author's exceptional work portraying a lively Somali, decades before the Second World War offered a refreshing outlook (though short-lived) for those minds which always conjured up poverty-stricken, disease-ridden people at the mention of many African nations.

Like expected, the journey was perilous and I was subjected to deaths, torture, violence, hunger, crime and all sorts of atrocious things that happen in the name of war. The vivid portrayal combined with the bloodstained history was quite enough to bring me to tears. Especially, I found the chapters on African history during the colonization heart-wrenching. What I found fascinating were those little snippets of information regarding different african clans. It was so heartwarming to realize how most of the clans worked well with each other, always lending a helping hand when necessary. When Jama travelled through the African landscape, he always found good hearted african people ready to offer him help. Not entirely convincing, but glad to see it happen at least, as a figment of imagination. Though the first half of the book was utterly compelling, I felt that the second half could have been a bit more succinct. Often, I kept wandering off the pages, mindlessly skimming over the lines, struggling to keep my focus on the page. The overly long descriptions and the stale scenarios bored me and I should admit that I expected a bit more fresh content and adventure. However, the story picked up pace towards the fag end, especially the chapter that narrated Jama's adventures on a British ship sent shivers down the spine.

"They rode a lorry together towards Abyssinia. They travelled for five days in the back of the lorry, marvelling at the paradise they passed through; the landscape was a juicy emerald green, with wild mango trees full of frolicking, singing birds, herds of giraffe and zebra gathered around blue watering holes. Jama would have been happy to jump off the lorry and stay in this small heaven but shiftas and patriots lurked amongst the trees and long grass. It was unsettling to see a place so lush, so full of promise without one tukul or any kind of human dwelling."

"To appease the hungry demon in his stomach, seething and cursing from his cauldron of saliva and acid, Jama had fought with stray cats and dogs over leftover bones. He tried to be brave but sadness and loneliness had crept up on him, twisting his innards and giving him the shakes."

Whether it be describing a lush landscape of Africa, or a painful hunger gnawing your guts, Nadifa's writing was rich, luminous and evocative. One particular instance that really gave me the shudders was the time when one of Jama's friend got mutilated by the Italians for stealing food to stave off hunger pangs. I was almost shaking in terror, crying out in pain as I read those horrific passages describing their barbaric acts. Another chapter that really moved me to tears was the last one that described the events that happened aboard a British ship 'Runnymede Park', carrying thousands of Jewish prisoners of war from the concentration camps to be taken to Britain after being denied entry into Palestine. Some of the horror stories refugees ranted during that voyage still kept ringing in my ears long after I finished reading the book.

"a young woman stood up to speak. 'I knew this man in Poland, he was a friend of my father's, he taught Hebrew to my sisters and me. When the German and Polish soldiers came, he saved my life. He hid me in a barrel in his flour mill while the rest of my family were walked to the river and shot. I saw their naked bodies floating down the river. If it wasn't for this man, I would be in that river with them'..."

For someone new to African fiction, Nadifa's book will serve as a window into their culture, clan, war-torn history. Her writing is truly an exemplary work of fiction and something to look forward to in the future. Sometimes, its even hard to believe that its a work of fiction because of her vivid narration. At times, I felt a little squeamish, giddy, unsettling reading her book. This is one story that will surely tug at your hearts' emotional strings, as the author plays with various elements such as grief, love and loss. In a way, thats partly the success of this novel. It drags you into the middle of a sweltering desert in Africa to witness the horrific injustices played out repeatedly in the name of war.

Hey again Chitts! Every since the North African revolutions started I have thought about this book often. I know what you mean when you say you sometimes had trouble keeping your focus on the story - the author could get terribly long-winded - but for the most part it was a beautiful story and very rewarding for readers who want to learn more about that part of the world. Amazing that the author's father still lives to tell his tale. I loaned my copy to someone and she moved to another country, so I doubt I am going to get my book back! :(

Lotus, Thanks for introducing me to this book! I read it after reading your glorious review. Interesting tidbit about the author's father. I am curious to read more about it.

sorry about your lost book, Sadly its one of the things book lenders often have to put up with..