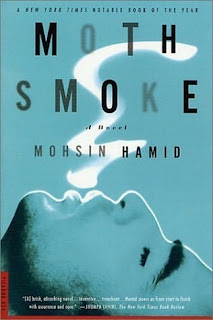 Title: Moth Smoke
Author: Mohsin Hamid
Paperback: 246 Pages
Publisher: Picador
Accolade: Betty Trask Award winner, PEN/Hemingway Finalist, NewYork Times Notable Book of the Year
Mohsin Hamid, was highly acclaimed and nominated for several literary prizes for his book 'The Reluctant Fundamentalist'. 'Moth Smoke' is his debut novel.
1998, Lahore. Pakistan had just announced its arrival in the nuclear world in retaliation to the nuclear tests conducted by Indian counterparts. Wild street jubilation broke out in the streets of Lahore, as it became not just a war between two nations, but a war among religions as well. Jobless markets, sluggish economy, political wrath and poverty grabbed and throttled the nation by its neck. In a place where uncertainty and poverty reigns, destruction and calamity took a center stage.
Set in these tough economic times, this novel, a dark and gloomy tale, so eloquently captures the tragic downfall of an ill-fated middle-class young man Darushikoh (Daru). In the opening scene, the protagonist Daru sat crouched in a prison cell having accused of murdering a little boy. Before the readers were given an opportunity to witness the proceedings, the novel back traced in time to the period where Daru began his life as a successful banker smoking occasional joints and partying with rich folks. He earned sufficient enough to afford an air-conditioner and a servant who ran errands and prepared his daily meals. Albeit his associations with the rich, he felt resentful about the chasm between the rich and poor, the corrupted political system and the economic divide that prevailed in the country.
For Daru, destruction first approached him from the workfront. He lost his banker job when he incurred the wrath of one of his valued clients. He struggled to get back into the workforce, but he lacked the right political 'connections'. All the basic privileges he was once entitled to like electricity, telephone, A/C were cut off. His addiction to hash reeled him in and plunged him into a world of complete darkness. Hope came in the form of a woman, Mumtaaz, his childhood friend Ozi's wife. Their common interests led from one thing to another ultimately leading to an extramarital affair. Unfortunately, their love led to a dispute and Mumtaaz was gone. Daru had no one but to turn to Sharad, a drug dealer who had grand plans of venturing into robbing boutiques all around Lahore. As drugs, money and sex sucked him deeper and deeper into the chasm, his doomsday was not far way. He became more of a moth that burnt into ashes when it flickered around the dazzling flames of a candlelight.
The book also presented view points of three other characters - Ozi, the flamboyant childhood friend of Daru, Ozi's wife Mumtaaz and Sharad, a dope dealer cum rickshaw driver. Ozi, Mumtaaz and Sharad played a critical role in the life and fall of Daru and their soliloquies come juxtaposed between Daru's own narration. Albeit providing a holistic view of the situation, their viewpoints made me less sympathetic and more cynical. Each character had their own flaws, unfulfilled dreams and sorrows, yet they all tried to justify their imperfections by condemning the society or political system. Mumtaaz, who claimed to have made false choices in her past, by marrying Ozi and thereby having a child she never wanted, justified her affair with Daru as a sort of respite from her stifing situation. Ozi, a money-launderer, had nothing to complain but his unloving wife. Daru, who constantly whined about the economic divide, thrashed his unpaid servant and lived off of selling hash and heroin to young school children for exorbitant amounts. To top that, he had an extramarital affair with his best friend's wife and puffed his life away into nothingness. In addition to the main story, several other short stories were embedded in them as well. Such as the harrowing tale of Dilaram, who was forced into prostitution and that of Manuucci, the servant whose kidney was stolen and thrown onto the streets. Each of these characters led a pathetic life, irrespective of their financial status. Some characters gained my sympathy, others didn't. Nevertheless, the book is a beautiful, realistic portrayal of a man who made all the wrong choices - by chance or choice.
Posted by Happy Reader at 9:39 PM

Chitts, so glad you read this one at long last! I deliberately haven't read your review as I definitely plan to get to this book one of these days. Received two new books in the mail this week, "Chef" by Jaspreet Singh and "Dahanu Road" by Anosh Irani. Have you ever read anything by Anosh Irani? Love his style, but he's not terribly prolific. Oh, and my sister picked up "Secret Son" for me in India....not sure which of the three books I should start next!

Lotus, Good to see you here :) You got me curious about Anosh Irani. Unfortunately, I haven't read any of his books. Did you review his book 'The Cripple and his Talismans' long time ago? I remember something like that. Now that 'Secret Son' is on the Orange Long List, I want to get to it sooner than later.

Mohsin Hamid is one of the best name in Muslims Writers being in such a younger stage, to prove himself a well writer. I would like to say proudly after reading MOTH SMOKE I am eagerly to write MOHSIN'S next book..Well done Mosin i think Daru is being you. Keep it up.

Mohsin Hamid is one of the best name in Muslims Writers being in such a younger stage, to prove himself a well writer. I would like to say proudly after reading MOTH SMOKE I am eagerly to write MOHSIN'S next book..Well done Mosin i think Daru is being you. Keep it up.