Say You're One of Them by Uwem Akpan 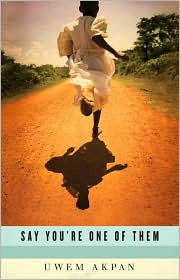 Title: Say You're One of Them
Author: Uwem Akpan
Genre: Short Stories
Hardcover: 368 pages
Publisher: Little Brown & Company
Life in Africa is not easy. Especially for children. The basic necessities of life like food, clean water, medicine and shelter is hard to come by if you live in Africa. Infant mortality rate is higher than ever. Even if they do survive, malnutrition, hunger, malaria and AIDS threaten their lives. About one fourth of African children don't live to see the age of 6. If they do, they don't go to school, because their parents can't afford the school fees. They live in shanty houses, pick street fights and do drugs. Child labor, trafficking, prostitution are extremely common. They live under perilous conditions fighting off hunger, illness and abuse. Life is merely a question of survival to them. We all know that. At least, that's what I thought. But, no newspaper clippings or video footage in the media prepared me for what I was about to encounter this in book.
Set in war-torn Africa, this book is a collection of five extraordinary stories (two of them the size of a novella) narrated by the African children. In "An Ex-mas Feast", 8 year old Jigana lives in a ramshackle hut with his parents and two siblings outside Nairobi. His mother sends out her younger ones begging for money and the eldest daughter of the household, Meisha (12 years old) turns to prostitution to make ends meet. Jigana's mother could only offer shoe glue (a substance you sniff to kill hunger) for meal after meal as they await Meisha to bring home their Christmas feast. But, What Jigana wants is not a Christmas feast after all. He dreams about going to school. Will she be able to afford his school fees? If she could, what would she have to lose after having lost everything?
Child trafficking in Africa is extremely common. Boys and Girls of very young age are trafficked to wealthier countries like Gabon primarily for labor. The children undergo a perilous voyage in the sea often traveling in unseaworthy vessels. They are smuggled across the borders with and without the knowledge of border patrol. Sometimes, they are even thrown in the sea for a brief period of time to cheat the guards. Often, the children don't realize what awaits them during and after their journey. Once they reach their destination, they are forced to work under brutal conditions without any wages or food. "Fattening for Gabon", the second story, focusing primarily on child trafficking tells the story of a boy who is prepped up for one such treacherous journey. Kotchikpa, a 10 year old boy and his little sister were entrusted in the hands of their uncle Fofo Kpee, after his parents were sickened by AIDS. Lured by the prospect of good wages, he decides to sell them into slavery. And, how they fatten up for their trip to Gabon is what this story is all about. When their uncle reneged on the deal, they get hunted down. And, Kotchikpa had to take matters in his own hands for his survival.
"What Language is That?" is the shortest story of all. It revolves around the religious clash in Ethiopia. Two girls were told not to speak to each other because of their different religions. Houses were burnt by angry mobs and Christians and Muslims killed each other. But, the two girls had to find a way to communicate with each other. After all, they are best friends forever.
"Luxurious Hearses" is another story about the Christian-Muslim conflict, but its even more harrowing than the previous one. Jubril, a teenage Muslim boy, flees from north of Nigeria to the south in one of those luxurious buses. Christians were fleeing the north as they were rounded by Muslims. But, When Jubril (born to a Christian father and a Muslim mother) was threatened about his religious loyalty, he begins a perilous bus journey among a horde of Christians hoping to seek refuge in his father's hometown. He has one hand amputated which he must hide at all cost, and an accent which would give himself away too easily. What are his odds at making to the other side of the country?
"My Parents Bedroom", chosen as a finalists for Caine Prize for African writing, is about the tribal conflict in Rwanda. It is narrated by a young girl Monique, who is born to Tutsi mother and Hutu father. In order to escape the dangerous situation, her mother disappeared one night after leaving her 2 year old baby in the hands of Monique. "Say, You're One of Them" was the last thing she said to them. But, little monique never realized what it meant until a group of hutus came pounding at the door looking for her mother. They eventually hunt her mother down and her father's hutu relatives force him to kill his wife. Will he be a loyal husband or a loyal Hutu?
Each story affected me in a profound way, but the last story is the most heart-wrenching story of all. Luxurious Hearses is a bit dragging and the local slang slowed me down a bit. But, it makes the stories more authentic. I think the author has made a tremendous effort in bringing out the horrors of ethnic wars and its impact on the African children. The stories are depressing, unforgettable yet too powerful. I would love to read more of his books in the future.
My Rating: 5/5
Posted by Happy Reader at 4:38 PM

(Diane) Bibliophile By the Sea said...

This one is on my Library holds list (glad you liked it a lot) - great review. I also have The Age of Shiva on my shelf.

@Diane ~ Its so wonderful to see you back here :) This book will be my most favorite books of all time..I hope you like them too.
@Radha ~ How have you been? I would love to know your thoughts on this book when you get to read it..