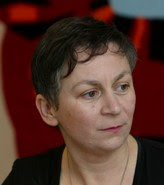 Anne Enright was tonight named the winner of the £50,000 Man Booker Prize for Fiction for her novel "The Gathering", published by Jonathan Cape.

According to the Booker prize website, Howard Davies, Chair of the judges said:
"The Gathering is an unflinching look at a grieving family. It’s the bleakness of one woman’s vision, a bleakness rooted in her family, her marriage and the death of her brother".

For a short Q&A with Anne Enright, click here.

I know this is mean but I'm relieved that McEwan didn't win...I honestly didn't think "On Chesil Beach" was worthy of the Booker. I'm sorry "Mr. Pip" didn't make it however!

I haven't read this. It goes to my ever growing TBR list.

@Lotus ~ I read "On Chesil Beach" and didn't like it quite much..Well, it wasn't worthy of a Booker, IMHO. I am currently reading Mr.Pip and like it so far!
@Sanjay ~ Do post your thoughts when you get to read it.

Chitts, I really want to read "Mr. Pip", it sounds so good!